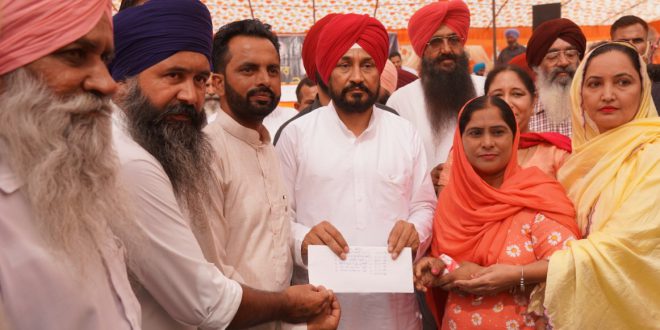 Chandigarh, 19 October (Ozi Indian Bureau)- Carrying forward his agenda of rural transformation in order to ensure overall development of villages, the Punjab Chief Minister Mr. Charanjit Singh Channi on Tuesday visited various villages of Chamkaur Sahib Constituency for the second day in a row and distributed cheques worth Rs. 27 crore for the development works in the 63 villages of Morinda Block.

Addressing the gatherings at villages Datarpur, Kalaran, Sarhana, Lutheri, Arnauli, Kainaur, Dhanauri and Dhangrali, the Chief Minister reiterated “I am indebted to all of you for electing me from this constituency for the third consecutive time after which the Congress High Command has now bestowed upon me the responsibility of Chief Minister.” He stated that with his elevation as the Chief Minister, now the elected representative of every village has in fact become the Chief Minister.

Emphasizing the need to empower Sarpanches and Panches in order to strengthen democracy at the grassroots level, the Chief Minister exhorted the youth to form clubs in the villages after the name of Shaheed-e-Azam Bhagat Singh so as to undertake youth centric initiatives. He also called upon the elected representatives in the villages to accelerate the pace of development works. “You arrange the labour force and the onus of arranging finances is with me”, said the Chief Minister.

The Chief Minister further said that in a major relief to the people residing in urban areas, the water usage charges have been reduced to Rs.50 per month for domestic connections of all categories. Channi also said that the Punjab Government has implemented the decision to waive the arrears of all consumers with power load up to 2 KW. Divulging more, he said that 52 lakh consumers out of total 72 lakh would be benefitted. “Yesterday I symbolically burnt the copies of the outstanding bills and also asked the people to forget the liability of the old bills”, added Channi.

Pointing out further, the Chief Minister said that the ponds located in all the villages of the constituency would be developed based on the Thapar model. Walking routes would be made around these ponds. The water from the ponds would be used for irrigation in the fields.

Underscoring the need to impart quality education to the children of the state as the top priority of the State Government, Channi disclosed that Special science and medical blocks would be set up in all the high and senior secondary schools of this constituency.  “Punjabi is our mother tongue and under no circumstances it will be neglected”, added the Chief Minister.

He announced that the development works related to the widening of all the link roads, construction of streets, drains, sewage system, community centres, renovation of cremation grounds, SC Dharamshalas, sprucing up the infrastructure in schools and dispensaries, opening of gyms in villages, cleanliness of ponds, upgradation of Schools and colleges would be undertaken with a missionary zeal.

Mr. Channi further said “I have been telling you in the last elections that once you elect me as your representative in assembly, you can get whatever you want and now I have become the Chief Minister. I am duty bound to do whatever you say. I do not want to cling to the chair instead my focus would be to fulfill the responsibility bestowed upon me. Besides, I aspire to improve the administrative system of the state,” said Channi.

The Chief Minister also announced to construct a 100 bedded hospital at Sri Chamkaur Sahib. He said that work for this state of the art hospital has already been commenced.

Underlining the need of world class healthcare facilities, the Chief Minister informed that the proposal to set up a world class Trauma Center at Morinda has been accepted and the construction work would be started soon.

The Chief Minister further divulged that the buildings of all the veterinary hospitals in the constituency would be upgraded and availability of doctors would be ensured.

The Chief Minister further said that the foundation stone of ‘Bela Bridge’ at a cost of Rs. 114 crore would be laid on October 30. He informed that the compensation of Rs. 70 lakh per acre would be given to the farmers whose land would be acquired for the bridge construction.

Among others present on the occasion included Deputy Commissioner Sonali Giri, SSP Vivek Sheel Soni besides Sarpanches and Panches of the villages.