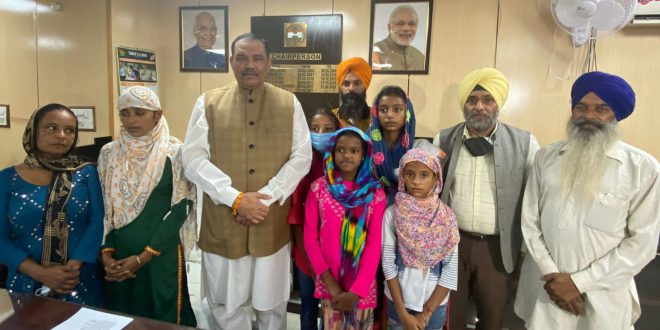 New Delhi/Chandigarh, 25th October (Ozi Indian Bureau)- National Scheduled Castes Alliance delegation led by its President, Paramjit Singh Kainth today brought the family of Lakhbir Singh to Delhi in a meeting with the National Commission for Scheduled Castes and its Chairman Vijay Sampla. Lakhbir, who hailed from a village in Tarn Taran in Punjab, belonged to the Scheduled Castes community was murdered by Nihang Sikhs around 5 am on October 15. His mutilated body was found near a farmers’ protest site at Kundli in Haryana’s Sonipat district.

The wife of the deceased, Jaspreet Kaur, sister Raj Kaur and his 3 daughters amongst other family members were brought by the NSCA to express their concerns and pain regarding the case infront of the Constitutional body formed under Article 338 of the Indian Constitution which protects the rights of the Scheduled Community all over India. Giving more information regarding the visit, Mr. Kainth said, “We’ve brought the family here today because they have so far not been provided any assistance financially, legally or otherwise by anyone. The family is suffering emotionally as well as struggling to make ends meet during this difficult time after the murder of the sole breadwinner of the family.”

The family was not even provided the courtesy of an Antim Sanskar prayer during the funeral of Lakhbir Singh and the injustice not only resulted in his murder but also continued with burning his body in the plastic bag with diesel poured over without any customary rights performed. Jaspreet Kaur wife of the deceased accompanied by her Father Baldev Singh and Brother Sukhchain Singh, further said, “We are being subjected to discrimination after this incident. The people have been behaving with our family as if we committed a heinous crime but in reality our family is suffering because my husband was brutally murdered and we have been provided no justice in this case. The whole family is under constant terror and we urge the government to provide us some relief.”

Mr. Kainth added, “The matter of the alleged ‘sacrilege’ will be decided through a legal investigation but in the meantime this inhuman crime deserves to be punished with severest of punishments. This Taliban style lynching has not sufficiently criticized by the so called ‘Representatives of the People’ MLA’s, MP’s and other other political leaders’ as well civil society. They have failed this family. This is a recurring theme where a SC individual is subjected to torture and is murdered but the society stays quiet whereas in any other incident there is huge uproar and anger. It seems that the life of a SC person counts less in the eyes of these political parties as it might not fuel their political careers at this moment.”

NSCA Gen-Secy Advocate Yadwinder Chauhan who was also part of the delegation urged the National Commission for Scheduled Caste’s Chairman Vijay Sampla to provide monetary relief to the family through the various schemes under the Union government. The delegation led by Mr. Kainth further emphasized the point that as the matter is sub-judice, they shall not interfere in the proceedings but what they demand is proper compensation to be provided to this aggrieved family by the Government.

NSCA further demanded that the Punjab Government also provide assistance to the family as well as assurance of a government job to one of the members of the family so that they can sustain their lives with some dignity and respect. Acting on the representation submitted by NSCA to the SC Commission on 16th October 2021, the Commission had asked for an ‘action taken report’ from the DGP Haryana in a week and inability to do so would allow the Commission under its constitutional mandate to summon the officials concerned.