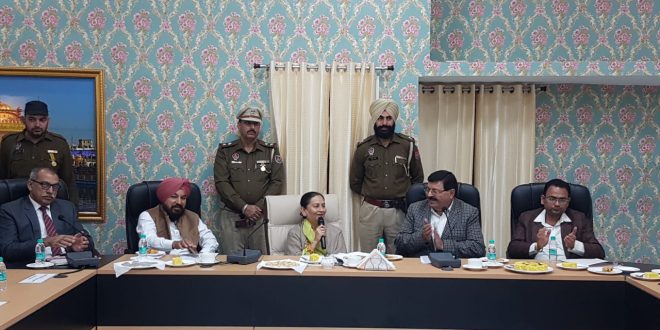 Presiding over the 97th meeting of Rajpura Pepsu Town Development Board, Punjab Revenue, Rehabilitation and Disaster Management Minister Mrs. Aruna Chaudhary on Tuesday accorded the consent to give proprietary rights to the families of 45 widows living in the city. Other works related to the development of the city with the cost of Rs.16 crore also got a green signal from the board during the meeting which was also attended by MLA and Special Invitee Member of the Board Hardial Singh Kamboj. She informed that ownership rights have been provided to the families residing on the land owned by the board of Kasturba Sewa Ashram under the Slum Dwellers Scheme Act.

During a press meet after the meeting, the Cabinet Minister and Chairperson of the Board Mrs. Aruna Chaudhary said that the Board has fulfilled its commitment for which it was constituted as with the concerted efforts to provide shelter to the families repatriated during the partition of 1947. She said that discussions have also been held to create financial resources for the sustainability and betterment of the board.

MLA Hardayal Singh Kamboj extended the words of thanks towards the Revenue Minister and said that the efforts are being scaled up for the development of Rajpura city during the tenure of CM Charanjit Singh Channi. He said that crores of rupees have been sanctioned for the development of the city during the meeting which would not only benefit the poor but also the families living in the city after the partition of 1947