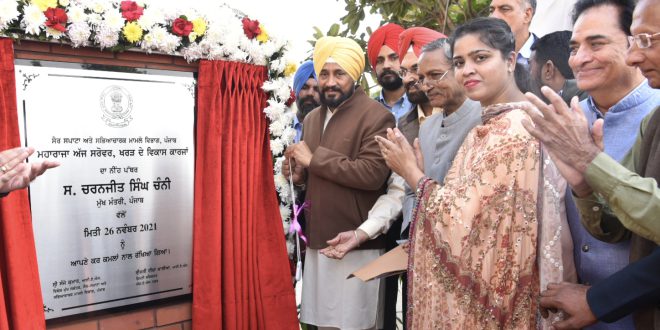 With a view to ensure overall development of the Kharar area, the Punjab Chief Minister Charanjit Singh Channi on Friday laid the foundation Stones of a slew of projects at a cost of Rs. 127.54 crore. In a landmark initiative, he announced upgradation of status of Gharuan from Panchayat to Nagar Panchayat and revealed that a Sub Tehsil would also come up here.

Earlier in his address at the office of Municipal Council, Kharar, the Chief Minister described his visit as a homecoming for him and said that Kharar has given him everything and made him what he is today. “I started my political journey from here itself. I know every nook and corner of the city. The people of Kharar have showered immense love upon me as my voting percentage increased everytime during the three times when I got elected from here as Municipal Councillor and also served as its President”, said Channi adding he would forever remain indebted to the people here. He also exhorted the Councillors to work diligently and go strict especially on the illegal encroachments.

The Chief Minister further pointed out that the development oriented projects would transform the face of the region and put it into higher growth trajectory. Describing the Water Treatment Plant at Kajauli as a gamechanger, the Chief Minister said that this would ensure clean drinking water to both Morinda and Kharar.

Likewise, the Chief Minister mentioned that the beautification of Ajj Sarovar was his dream ever since he was an MC and now it has come to fruition. Besides, he also said that additional sum of Rs. 10 crore would be allotted for sprucing up the infrastructure at the holy place. The Development Board in this regard has been constituted and the Tourism Department would oversee the project.

Coming to the Government Model Senior Secondary School at Village Badali, Channi disclosed that he would give Rs. 5 crore more for the infrastructural mechanism at the school if the village Panchayat gives another 3 acre land for construction of a stadium apart from 5 acre given earlier on which the school would come up. He also said that the school would benefit the people of as many as 37 surrounding villages. He also announced a community Centre for the village.

Further, the Chief Minister also announced Rs. 10 crore for laying the astroturf at Khalsa school, gave nod to a sports complex at sunny enclave, Rs. 2.50 crore for water supply at village Gharuan, a Bus Stand for which tender has been allotted which would be opened on December 16 this year. He also announced that a park would be developed near the bus stand where an army memorial would be constructed.

In his address, the MLA from Kharar Kanwar Sandhu said that it is a matter of pride that a representative of it’s people has risen to become the Chief Minister of the State. Lauding the Chief Minister for his pro people and pro development approach, he expressed hope that the region would undergo further development under Channi’s tutelage.