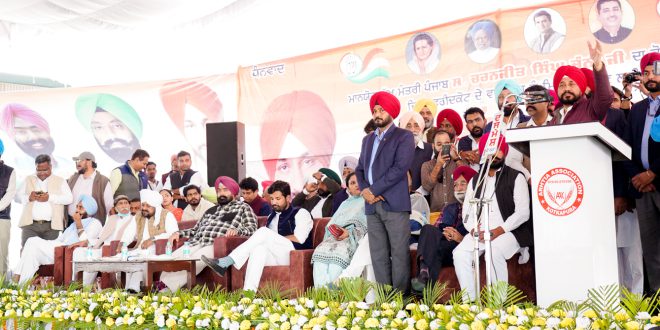 The Chief Minister was addressing a mammoth gathering in the New Grain Market of Kotkapura where he also announced to give Rs 15 crores each for the overall development of Kotkapura and Jaitu constituencies. He said that as the matter is subjudice so he cannot divulge more details. However, CM Channi said that Badals were hand in glove with perpetrators of this heinous crime.

Recalling the firing incidents that occurred in Behbal Kalan and Kotkapura, CM Channi said that the firing did not took place on peaceful protestors at these places but in reality took place on our chests. “We vow that real perpetrators of this unpardonable crime will not be spared and those who were very much part of the execution of agriculture bills,” Chief Minister further said.

Reiterating his government’s stance, Channi said that all of his government’s promises have been transformed into realities during just two months. “Apart from other welfare schemes now we are offering lowest price of power and petrol in Punjab which is the most useful and required element for survival,” he said.

On the other hand the AAP is announcing only the false promises, fake guarantees and bundle of lies. “Kejriwal is an imposter and his announcements and schemes are actually not for the welfare of public even in Delhi, what to talk about Punjab,” Channi said. He pointed out that the free power announced in Delhi upto 400 units is nothing but a gimmick. He added that Delhi government charges hefty amount if it crosses 400 units, which is the bare normal consumption of a household.

Transport Minister Amarinder Singh Raja Warring who also addressed the public said that nobody had ever dared to stop the buses of Badals and their government has not only stopped all the illegal buses but have also taken 135 buses into custody to fill the state coffers with Rs 14 crores. The Minister said that the daily income of the government buses increased to Rs 1.15 crore daily.

He stated that whatever state transport department is doing to stop the illegal buses from plying is due to the encouragement given by the Chief Minister Charanjit Singh Channi.

At the onset of function Chairman Marfed Punjab and MLA from Faridkot Kushaldeep Dhillon welcomed the Chief Minister and sought grants for developmental works in Faridkot.

Faridkot MP Mohammad Sadiq also addressed the gathering and demanded up-gradation of a hospital in Jaitu which was duly approved by the Chief Minister.