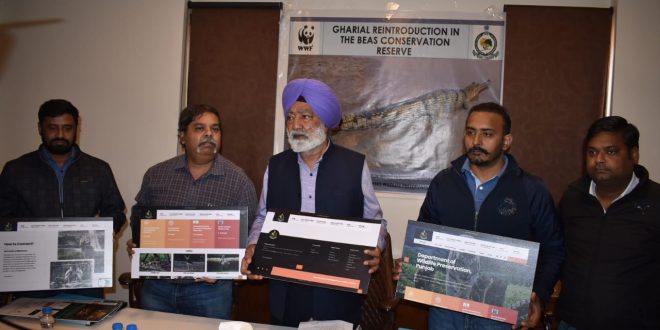 In a move to protect the critically endangered Ghadiyal (Gavialis Gangeticus ), the Punjab government under the third phase of Gavialis Gangeticus rehabilitation project released 24 ‘gharials’ in Beas river near Kulla Fatta village of Tanda, on Sunday.

Forests and Labour Minister Sangat Singh Gilzian said that the state government is concerned to protect these massive reptiles, which is on verge of extinction and taking persistent initiatives to save them.

The Wildlife Department of the Punjab Government is continuously working on establishing the breeding population of the crocodile, Minister said, who was accompanied by Chief Forest Officer and Chief Wildlife Warden.

The Forest Minister also launched a mobile app to issue wildlife hunting permits and ammunition licenses to people within a 10 km radius of the Wildlife Sanctuary for the convenience of the people. He said that now the process of NOC for getting license has been made easier for the people. He said that the crocodile species is on the verge of extinction globally and this species is now found in the world only in some rivers of North India Ganga, Yamuna, Chambal, Bangladesh and Nepal.

He informed that gharial was common in Beas river till 1960 and since then work has been started for its protection in Punjab.

Minister said that a joint survey conducted by the Forest Department and the World Wide Fund for Nature (WWF India) reveals that gharials are spreading across the Beas River and there is a 40% to 50% rise in the population of this reptile due to the sincere efforts of the department.

He informed that under the first phase of this project 47 gharials were released earlier in Beas Conservation Reserve in the districts of Amritsar and Tarn Taran during the year 2017-18 and under the second phase in the year 2020-21 with Salemupar and Tahli forest of Hoshiarpur district. Apparently, in the Beas Conservation Reserve area, 23 reptiles were released by selecting a favorable island for gharials here.

Minister Sangat Singh also launched the ‘Ghadiyal Coffee Table Book’ prepared by the Wildlife Wing, which sheds light on the expansion of the Ghadiyal rehabilitation project and the efforts made by the Punjab Government.

Apart from this, he launched a new website of Wildlife Wing of Department of Forest and Wildlife Preservation Punjab https://wildlife.punjab.gov.in/index, so that people can fetch information of protected areas and other information related to wildlife areas.