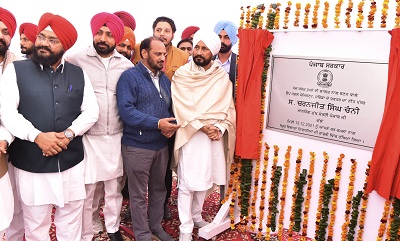 PUNJAB CM LAYS FOUNDATION STONES OF SLEW OF DEVELOPMENT PROJECTS TO THE TUNE OF RS. 100 CRORE IN KHARAR AND MORINDA

The Punjab Chief Minister Charanjit Singh Channi on Monday laid the Foundation stones of a slew of significant projects worth Rs. 100 crore aimed at overall development of Kharar and Morinda. The Chief Minister also announced an additional Rs. 10 crore for the all round prosperity of Morinda.

Laying the foundation stone of an ITI, an indoor sports hall including an auditorium and a football field at Village Tripri in Kharar at a combined cost of Rs. 20 crore , the Chief Minister said while thanking the village panchayat Tripri for donating 8 acres of land, said the upcoming ITI would be a milestone in affording a chance to the youth of the region in honing their Skills the indoor sports hall would comprise facilities for Sports such as Gymnastics, Basketball, Volleyball and others thus giving a huge boost to the sporting infrastructure of the area. “The ITI building would be completed by the end of January, 2022 while the indoor Sports hall would see completion by August 2022”, said Channi adding the football field would be completed by April, 2022.

Likewise at Morinda, the Chief Minister laid the Foundation stone of 100 percent water supply, and sewerage, canal water supply and other development works at a cost of Rs. 74.32 crore besides the new SDM office building at the cost of Rs. 5 crore which would come up in 2 acre area. The Chief Minister further pointed out that water supply project would ensure clean water to the towns of Morinda and Kharar from the Kajauli Water Works.

Interacting with the media persons, Channi while attacking the Aam Aadmi Party (AAP) leader Raghav Chaddha over spreading false rumours that four of his Cabinet Ministers might join the AAP, warned the party to desist from mouthing lies in order to create unnecessary hype. “AAP only wants to create its nuisance value by indulging in misleading and malicious talk but these tactics would backfire”, added the Chief Minister.

Meanwhile, the Chief Minister also handed over cheques to the tune of Rs. 6.85 crore to 140 Youth Clubs/Welfare Societies of Sri Chamkaur Sahib, Rupnagar and Morinda blocks of Sri Chamkaur Sahib constituency. Out of these, 68 are operating in rural while 72 are functional in the urban areas.