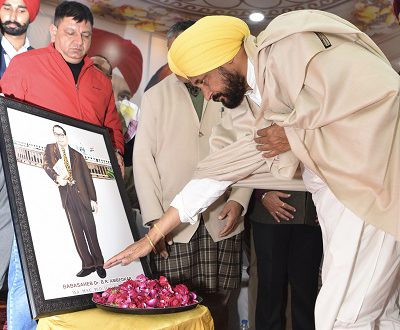 Addressing a gathering here after dedicating Ambedkar Bhawan to the masses here today, the Chief Minister handed over a cheque of Rs 4.14 crore to Municipal Corporation Ludhiana for completing the ongoing works at prestigious Ambedkar Bhawan in the district.

The Chief Minister said that this trauma centre will be a real tribute to Baba Sahib Dr Ambedkar and will come over at a cost of Rs 10 crore. He said that apart from it Rs 10 crore has been spent till date on Ambedkar Bhawan out of which Rs 4 crore has been contributed by GLADA, Rs 1.65 crore by Ludhiana Improvement Trust and remaining by MC Ludniana. CM Channi said that Ground floor hall with capacity of 500 people was already complete along with Basement parking for vehicles. He said that state government will bear entire expenditure for construction of first floor of indoor adding that the state of art hall will be fully sound proof.

Meanwhile, the Chief Minister called upon the people to contribute towards making an ideal society by following the principles of equality and liberty as propagated by Bharat Ratna Baba Saheb Dr BR Ambedkar. Describing Dr. Ambedkar as a great scholar, jurist, economist, social reformer and a statesman, he said that Dr Ambedkar was one of the most towering personalities in the entire world history. CM Channi said that though Dr. Ambedkar hailed from a humble family but his exceptional contribution for the society has brought him in the league of global leaders.

Giving a major respite to the street vendors (rehri/fadi), the Chief Minister announced that these hard workers will not be unnecessarily harassed by the Police or administration. He said that these street vendors should work fearlessly as the Chief Minister is their voice from now onwards. CM Channi further said that in consonance with the policy of the state government, the Municipal Corporation Ludhiana will today hand over letter to regularise services of 2480 sanitary workers/ sewerage men and other staff in civic body.