Breaking News
Home / BREAKING / No Vengeance Against Majithia; Law Taking Its Own Course As Per Court Directions, Says Channi 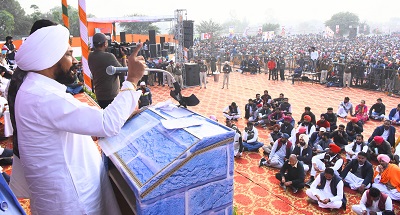 No Vengeance Against Majithia; Law Taking Its Own Course As Per Court Directions, Says Channi

Punjab Chief Minister Charanjit Singh Channi on Wednesday said that his government won’t allow any drug trafficker to go scot free as law will take its own course in Majithia’s case.

Addressing a mammoth gathering here at the Grain Market, CM Channi reiterated his government firm commitment to completely eradicate the menace of drugs while adding that there was no political vendetta in Majithia’s case. He also announced Rs 5 crores for overall development of Gidderbaha and upgradation of Doda Hospital and laid foundation stones of Gidderbaha Bus Stand and PRTC Sub-Depot.

CM Channi also promised to construct a memorial in the memory of all those farmers who laid down their lives in the fight against the three black farm laws.

Taking a dig at AAP Supremo Arvind Kejriwal and MP Bhagwant Mann for withdrawing his statement regarding Majithia’s involvement in drug trade while making a written apology to Bikram Majithia, CM Channi said that now it’s time for AAP leaders to apologise the people of Punjab.

“See the kind of politics AAP is doing, they apologised a person who was facing the heat of drug accusations in pushing our youth to drugs”, Channi said. Pointing out further, CM Channi said that his government will also not let the culprits involved in the heinous acts of sacrilege to run away from the clutches of law.

Meanwhile, Deputy CM Sukhjinder Singh Randhawa also said that the Channi led government is now gradually wining over the trust of people in governance as the same touched the lowest ebb due to misrule coupled with gross inefficiency during the regime of Badal as well as Captain Amarinder Singh.

Addressing the public, Local MLA and Transport Minister Amarinder Singh Raja Warring vent out his anger at Badals and their transport company.

“The reign of terror unleashed by Badals have been suppressed to a considerable extent in the region and it would be vanished for times to come provided Congress is given another chance to serve the people of state.”, Warring said.

He thanked the people of his constituency for coming out in such a large numbers and expressed his gratitude for the CM and Deputy CM with promises of releasing funds.