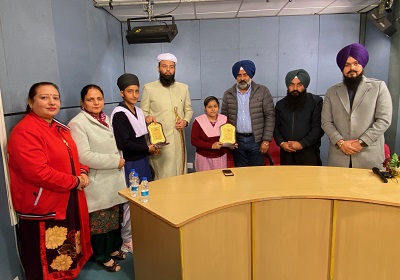 “The events that unfolded at Fatehgarh Sahib and Chamkaur Sahib during the course of winter months caused a huge transformation in the history. The supreme sacrifice of the Sahibzadas and the Sikh soldiers would continue to be a source of inspiration till eternity. The effort made by the School Education department to connect the school children with the sagas of martyrdom and ethical values is laudable.” These views were expressed by the Jathedar of Sri Akal Takht Sahib Giani Harpreet Singh while addressing the webinar on ‘Jeevat Kayi Hazaar’ held by the Education Department for making the younger generation aware about the matchless sacrifice of the family of Sri Guru Gobind Singh Ji.

The Education Minister Pargat Singh had given the directions to all the educational institutions of  the state to conduct special sessions dedicated to the martyrdom of four sahibazadas. Pursuant to that, the department held this webinar with the assistance of Alliance of Sikhs in which nearly 14 lakh students from 3300 schools took part through EDUSAT.

In his recorded message, Giani Harpreet Singh said that during the bygone times the elderly people used to inspire their children with the heroic tales from Sikh history but the modern day youth is drifting away from its rich heritage which is why the Education Department deserves commendation. He also advocated making this glorious heritage a part of the school curriculum.

The Education Minister Pargat Singh said that these epoch making events taking place during the winter months contain the glorious annals of standing up to the tyranny and oppression. “The supreme sacrifice made by Baba Ajit Singh Ji and Baba Jujhar Singh Ji at Sri Chamkaur Sahib and Mata Gujri Ji and Baba Zorawar Singh Ji and Baba Fateh Singh Ji at Fatehgarh Sahib is unmatched in the history of the world and these events inspire us all to fight for truth and justice”, said Pargat Singh while emphasizing that during the historical occasions the educational institutions must conduct minimum one hour duration programmes.

The Shahi Imam, Punjab, Maulana Usman Rehmani Ludhianvi while speaking on the occasion, said that the martyrdom of the family of Sri Guru Gobind Singh Ji was not against any religion but against the tyranny and cruelty unleashed by the government of the day. He further said that in this war of justice waged by the Guru Sahib many muslims such as Peer Buddhu Shah, Gani Khan, Nabi Khan and Nawab Malerkotla Sher Muhammad Khan also raised their voices against the oppression. The entire family of Guru Sahib achieved martyrdom while serving the cause of humanity. The present generation should take inspiration from the sacrifice of sahibzadas who were martyred at a very young age, added the Shahi Imam.

Earlier, Parampal Singh from Alliance of Sikhs thanked the Education Minister for undertaking such an initiative to guide youngsters about our glorious past. The compeering was ably performed by Sukhdev Singh.

On the occasion, the girl students of the Government Senior Secondary School, Sohana Gurjot Kaur and Tanisha Sharma expressed their views about the life and martyrdom of the Sahibzadas and recited poems. They were also felicitated on the occasion.