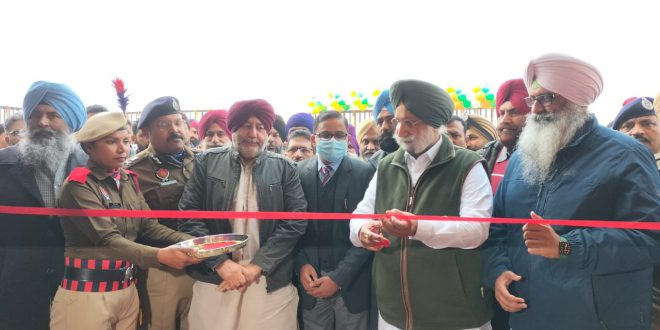 “It is high time that Punjab is pulled out of the drug quagmire for which the State Government and the Police Department are burning midnight oil. However the wholehearted cooperation of the people is extremely important.” These views were expressed by the Deputy Chief Minister S. Sukhjinder Singh Randhawa here today while inaugurating the Central Jail at Goindwal Sahib. He also gave a patient hearing to the issues being faced by the inmates.

Giving details, the Deputy Chief Minister said that the Central Jail Goindwal Sahib has been transformed into a reform home in the truest sense. It can house 2780 inmates and is spread over 85 acres with Rs. 190 crore spent on giving it a modern look. He also said that adequate arrangements have also been made for meeting the inmates in the new jail.

Divulging further, the Deputy Chief Minister added that the Punjab Government has formed a Jail Board for improving lot of the jails. “Arrangements are being made for installing as well as the factories in the Punjab jails so as to make them financially viable”, said S. Randhawa adding that a tile manufacturing factory is also coming up in Goindwal Sahib Central Jail where the prison inmates would given daily wages. He also said that the counselling of the inmates would also be undertaken so as to make them part of the mainstream. He further added that the purchase of private ration has been done away with in jails and now the entire necessary purchase would be made from the Markfed, Milkfed and the Sugarfed.