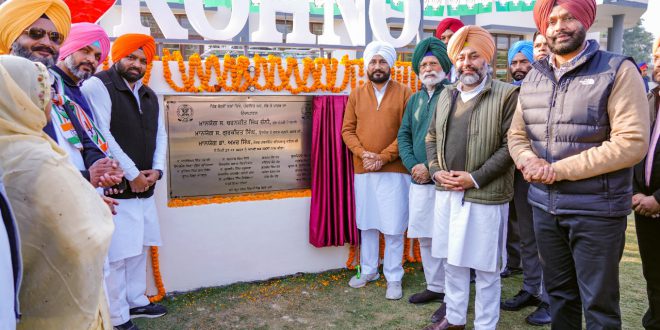 Chief Minister Charanjit Singh Channi on Monday said that Aam Aadmi Party Chief Arvind Kejriwal should not take Punjabis for granted by building castles in the air and should understand that Punjabis are much more capable for leading their own state and need not an outsider like him. “Proud Punjabis would never let an outsider like Kejriwal to rule them,” he said.

While addressing the gathering, CM Channi said that his government is implementing the common man’s agenda in the larger interest of the state while people like Kejriwal are promising a moon to people in Punjab, rather than working for the betterment of ‘Aam Aadmi’ of Delhi.

He said that Kejriwal is best at rolling out bundles of lies before the people of Punjab. He said it was same Kejriwal who, before the 2017 Punjab Vidhan Sabha elections, had given a “guarantee” that he would throw Bikram Singh Majithia behind bars for his relations with the drug mafia.

“And when AAP failed to form government in Punjab, same Kejriwal offered unconditional apology to Majithia in the court, that too on AAP letterhead. Families who have lost their sons due to menace of drugs will never forgive Kejriwal,” he said while adding that his government has set the wheels in motion by not only booking Majithia but raids are also underway to arrest him.

He said that the “Chacha-Bhateeja” relationship between former CM Capt Amarinder Singh and Bikram Singh Majithia is now an open secret now as the former has been issuing statements in favour of the Akali leader.

CM Channi said that ever since he became Punjab CM, more than 100 decisions have been taken in the interest of Punjabis. He said that Punjab is providing cheapest petrol and diesel in the entire northern region and likewise, rates of power are cheapest in the entire country.

The Chief Minister unequivocally said that he will not spare a single person who has committed sin against the people of Punjab. He urged the common people to unite and support the Congress party by rising above their parochial considerations of caste, creed, colour and religion.

He said that to check illegal sand mining in Punjab, the state government would give a reward of Rs 25000 to every person who gives a proof in video or any other form about any violation of the norms.

Cabinet Minister Gurkirat Singh Kotli said due to the pro-people policies of CM Charanjit Singh Channi, a large number of industries are being set up in the state. He said that as he represents the Khanna constituency, he is making dedicated efforts to ensure maximum Industrial units are set up in the area, as it would bring prosperity to the area by generating employment.

Kotli said that his grandfather and former CM Beant Singh sacrificed his life for restoring peace and communal harmony of the state. He said that Chief Minister Charanjit Singh Channi is working tirelessly in the interest of Punjab and Punjabis.