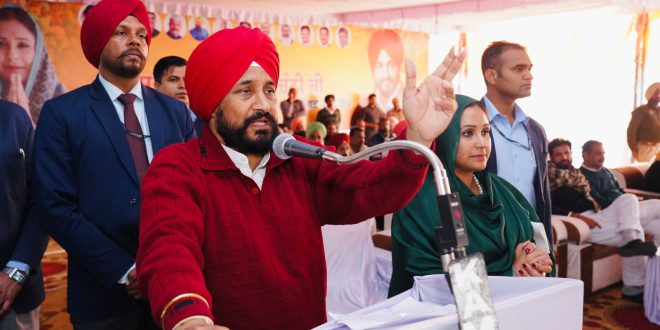 CM CHANNI ALSO EXTENDS COMPENSATION OF RS.17000 PER ACRE TO BASMATI FARMERS IN LIEU OF LOSS DUE TO HAIL STORM

After marathon discussion with Kisan Majdoor Sangharsh Committee, Punjab Chief Minister Charanjit Singh Channi on Tuesday decided to extend relief of Rs. 17000 per acre also to the Basmati growers, whose crops have been substantially damaged due to hail storm during the past Kharif season. Following this assurance by the Chief Minister, the Sangharsh committee immediately announced to postpone its Rail Roko agitation.

During the discussions with the delegation of Kisan Majdoor Sangharsh Committee led by its state President Satnam Singh Pannu on host of issues, CM Channi urged them to shun the path of agitation as his government was already sensitized to their hardships and concerns. However, CM Channi said that the Rail Roko has already adversely impacted the supply of urea and DAP across the state thus further accentuating their woes especially during the current Rabi season.

Several issues including the cases registered against farmers at Delhi and by RPF during farmers’ agitation, debt waiver, providing jobs and compensation to the families of the farmers who sacrificed their lives during farmers’ agitation, compensation for crop damage, crop insurance and making the payment process easy for Abadkars (farmers who have been tilling the land in occupation since long without any ownership rights) were deliberated at length.

Summing up the discussion, the Chief Minister assured the delegation that he would soon take up the matter with the Home Minister Amit Shah for prompt withdrawal of cases registered against farmers by Delhi Police as well as RPF during the yearlong agitation against black farm laws.

Reiterating his government’s solidarity with the victim families of farm agitation who lost their family members, CM Channi assured the delegation that the most of the names mentioned in their list of such farmers have already been considered to provide financial compensation of Rs. 5 lakh and a government job.

On the delegation’s request, CM Channi also agreed to include names of three farmers who died earlier in yet another agitation prior to the yearlong farm struggle as a special case for consideration of similar relief in terms of financial compensation and a government job to their eligible family members.

Giving a major relief to the Abadkars, CM Channi directed the Colonization department to workout modalities for bestowing ownership rights on those tillers in occupation of land since long after allowing them to make payment in four installments in this regard.

Acceding to another demand of the delegation, CM Channi said that to ensure farmers must get remunerative price of their produce the state government would soon come out with a policy for covering all those crops under State MSP, which are currently not covered under MSP regime by Centre. Likewise, CM Channi also welcomed the idea of delegation to create a Basmati Trading Corporation to ensure export of Basmati across the globe with twin objective of providing remunerative prices for their crops and to give a major push towards crop diversification. On both issues, CM Channi asked the Chief Secretary Anirudh Tewari to conduct a detailed study before taking a final call on this count.