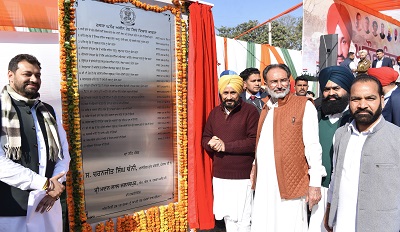 With a view to ensure overall development of Ghanaur assembly constituency, the Punjab Chief Minister Charanjit Singh Channi on Wednesday announced Sub Division status for Ghanaur which would be formally approved in the next Cabinet meeting.

CM Channi kick-started slew of projects to the tune of Rs. 269 crore during a Vikas rally here at Grain Market. These projects comprised laying of foundation stones worth Rs. 137 crore including Rs. 105 crore for strengthening road infrastructure in the constituency and Rs. 32 crore for various Sewerage and clean drinking water schemes.

Likewise, the Chief Minister also inaugurated the development centric works worth Rs. 132 crore comprising Rs. 95 crore spent on widening and the maintenance of roads, Rs. 24 crore on concretizing ‘Kutcha Rajbahas’ besides construction of bridges, Rs. 10 crore for draining of polluted water, rejuvenation of ponds, construction of Panchayat Ghars and refurbishing the rooms of Government schools of the constituency apart from Rs. 2.83 crore on the sprucing up of the infrastructure at the grain market and vegetable market.

In a further bonanza worth Rs. 28 crore for the Ghanaur constituency, Channi announced Rs. 10 crore each for pending development works as well as pending link roads and their rejuvenation, Rs. 4.75 crore for widening of Narwana canal kutcha path by 12 feet from Kheri Gandian to Ghanaur apart from 12.33 Km long road, Rs. 1 crore each for the university college auditorium at Ghanaur and Rajput Bhawan at village Dahrian, Rs. 50 lakh for construction of Guru Ravidass Bhawan at village Ajraur, Rs. 10 lakh for sprucing up of Allahrakkha gaushala, Rs. 27 lakh for according new look to the gaushala at village Sonemajra and Rs. 50 lakh for construction of Holy Sri Gita Ji bhawan.

Castigating President Shiromani Akali Dal (SAD) Sukhbir Singh Badal and Bikram Singh Majithia, the Chief Minister said that until the time these two are at the helm of affairs in the Akali Dal, the grand old party cannot hope for revival. Remembering the towering SAD leaders such as Late Jathedar Gurcharan Singh Tohra, Late Jathedar Jagdev Singh Talwandi and Late Master Tara Singh, the Chief Minister said the party which once boasted of such a leadership has been brought to ruins by Sukhbir Singh Badal and Bikram Singh Majithia. “The same Majithia is now on the run from law after registration of FIR against him in the drugs case”, said Channi citing it as the proof of his government’s commitment to wipe out drug menace.

Taking on the Aam Aadmi Party (AAP) supremo Arvind Kejriwal for his antics, Channi said that the same Kejriwal who earlier used to accuse Majithia of being the kingpin of drug trade, apologized to the latter. Further, the Chief Minister said that Kejriwal is indulging in theatrics with the sole aim of capturing power in Punjab but is unable to keep his flock together as 10 of his MLAs and 3 MPs have already bid goodbye to him. “How can such a person give good governance to the people of Punjab”, added the Chief Minister.

Accusing Captain Amarinder Singh of being hand in glove with the akalis, Channi said that the former Chief Minister listened only to his cronies and is paying the price for the same.

Listing his Government’s pro-people measures, the Chief Minister said that the arrears of power bills worth Rs. 1500 crore have been waived off for consumers having load up to 2Kw, Power tariff for domestic consumers reduced by Rs. 3 per unit, Water charges brought down to flat Rs. 50 from earlier Rs. 160, Prices of Petrol and Diesel saw reduction by Rs. 10 and Rs. 5 respectively, Prices of sand fixed at Rs. 5.50 per cubic feet, and Compensation for crop damage increased to Rs. 17000 from Rs. 12000.

Expressing gratitude to the Chief Minister for bestowing special attention on the Ghanaur constituency, the MLA Madan Lal Jalalpur described Charanjit Singh Channi as the people’s Chief Minister who has firm grip on the pulse of the masses.

Later on, while addressing another rally at Samana, the Chief Minister, on the demand of local MLA Rajinder Singh, announced the takeover of Public College, Samana by the State Government and upgrading the local civil hospital from 50 to 100 beds and said that both the decisions would be formally approved during the Cabinet meeting on January 1. The Chief Minister also announced Rs. 5 crore for the overall development of the Samana constituency.