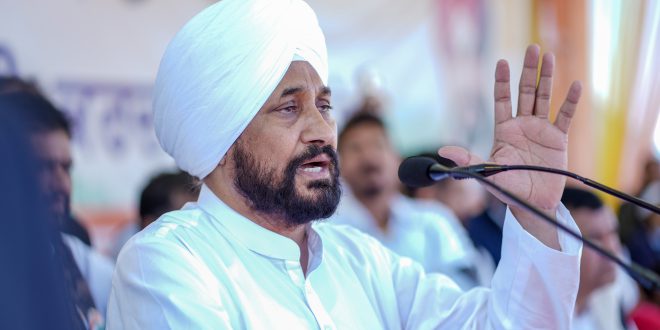 Addressing the gathering here after laying foundation stone of several development works worth Rs 18 crore here at New grain market, the Chief Minister unequivocally said that there was no threat to life of Prime Minister Mr Narendra Modi but he cancelled his program on Wednesday because of thin presence of people in BJP’s rally. He said that empty chairs chided the PM on his visit to state due to which he went back to national capital citing frivolous reason of security threat. CM Channi said that the false pretext on which PM cancelled his visit is a part of larger conspiracy to defame Punjab and murder democracy in the state on lines of what was done earlier in Jammu and Kashmir.

The Chief Minister said that how can the life of PM be threatened if the protestors were more than a kilometre away from him. He said that at the place where cavalcade of PM stopped not even a slogan was raised then how his life was threatened. CM Channi reminded the PM that Punjabis have sacrificed life for unity, integrity and sovereignty of the country adding that they can never pose any danger to life and security of PM.

The Chief Minister said that PM is a respected leader of nation but it doesn’t behove a leader of his stature to indulging in such cheap theatricals. He said that the thin presence of public in rally has exposed the poor position of BJP in the state which is not going down well to its entire leadership. Citing a comparison, CM Channi said that weather was poor yesterday also and is poor today too but there were very few takers for BJP’s rally on Wednesday whereas today’s rally of Congress across state are swelling with people.

The Chief Minister said that yesterday’s gimmick by the PM and his coterie is aimed at imposing President rule in state. However, he reminded the PM that Punjab can be won only by love and not by pressure. CM Channi said that Punjabis will vehemently oppose any such move to destabilise democracy in state.

The Chief Minister urged PM to stop defaming the state and its people for vested political interests. He reminded the PM that Punjabis have played a key role in socio-economic development of country besides safeguarding its borders. CM Channi said that slanderous campaign launched by BJP is an insult if all the Punjabis which is unwarranted and undesirable.

Quipping on former Chief Minister Captain Amarinder Singh, the Chief Minister described him as a ‘political deadwood’ which was evident from the fact that Royal scion of Patiala addressed empty chairs in rally on Wednesday. He said that everyone knows Captain has backstabbed Punjab due to which no one wants to listen him. CM Channi said that the day is not far when all the candidates of Maharaja will lost their deposits in poll.

Training his guns against Akalis, the Chief Minister said that Badals have looted the state during their decade long rule in state. He said that people will teach Akalis a lesson by routing them out of Punjab. CM Channi said that Punjabis will not forgive the Akalis for their sins against state.

Assailing AAP supremo Arvind Kejriwal, the Chief Minister described him as a ‘chronicle liar’. He said that Kejriwal is trying to mislead people of state with his fake promises. CM Channi said that Punjabis will not fall prey to the misleading propaganda of the AAP.

Earlier, the Chief Minister dedicated an Environment park in memory of Giani Kartar Singh and a road constructed at a cost of Rs 8.21 crore besides laying foundation stone of development works including upgradation of Primary Health centre at Gardhiwal to Community Health centre, Tehsil complex at Tanda Urmur, 66 Kv Sub station at village Sansarpur, synthetic athletic track at Tanda and others.

Welcoming the Chief Minister and other dignitaries, Cabinet Minister Mr Sangat Singh Gilzian thanked CM Channi for showering grants in his constituency. He said that congress party has taken several path breaking initiatives for well being of every strata of society. Mr Gilzian vowed to serve the people far more zealously.